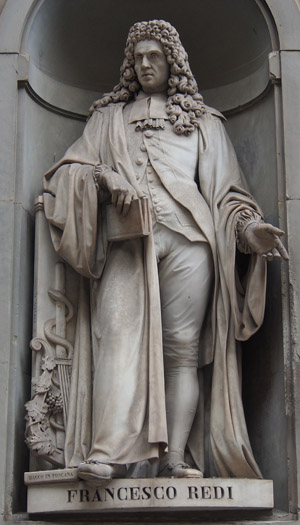 Francesco Redi (1626-1697) was born in Arezzo, Italy, studied at the University of Pisa, and became court physician to the Medicis in Tuscany. He is generally considered one of the foremost scientists of his time and contributed to science and the arts in a number of areas, including a treatise on venomous snakes, “Osservazioni intorno alle vipere”, published in 1664. Through this latter work and other contributions he is considered one of the most important founders of the study of toxinology.

Amongst his observations on vipers, all essentially new at that time and contrary to then-held beliefs, were that the effects of a viper bite (in Italy) applied to all animals, with smaller animals more readily killed, that dose of venom and route and place of injection were important, that non-fatal bites could be expected to recover after a period of illness, that venom ingested orally was not harmful, and most importantly, that venom was the yellow liquid expelled from the fangs.

More detail on the life and contributions of Francisco Redi may be found elsewhere, with a good starting point being Prof. Gerhard Habermehl’s paper, “HISTORICAL REVIEW FRANCESCO REDI – LIFE AND WORK”, published in Toxicon 1994, 32(4):411-417.

In 1967 the IST established an award for the recognition of toxinology scientists or clinicians who have made outstanding contributions to the field of toxinology. This award is made at each World Congress of the IST and is the highest award bestowed by the Society. The determination of who should be considered for the Redi Award is made by a select committee chaired by the Editor of Toxicon and is only announced at the World Congress, immediately prior to inviting the new awardee to present a lecture, the Redi Lecture, to the Congress, on a topic of the awardee’s choosing.

The venue and dates for the next World Congress will be:
Conrad Abu Dhabi Etihad Towers
Abu Dhabi, United Arab Emirates.
October 16-21st
Register at ist2022.com.